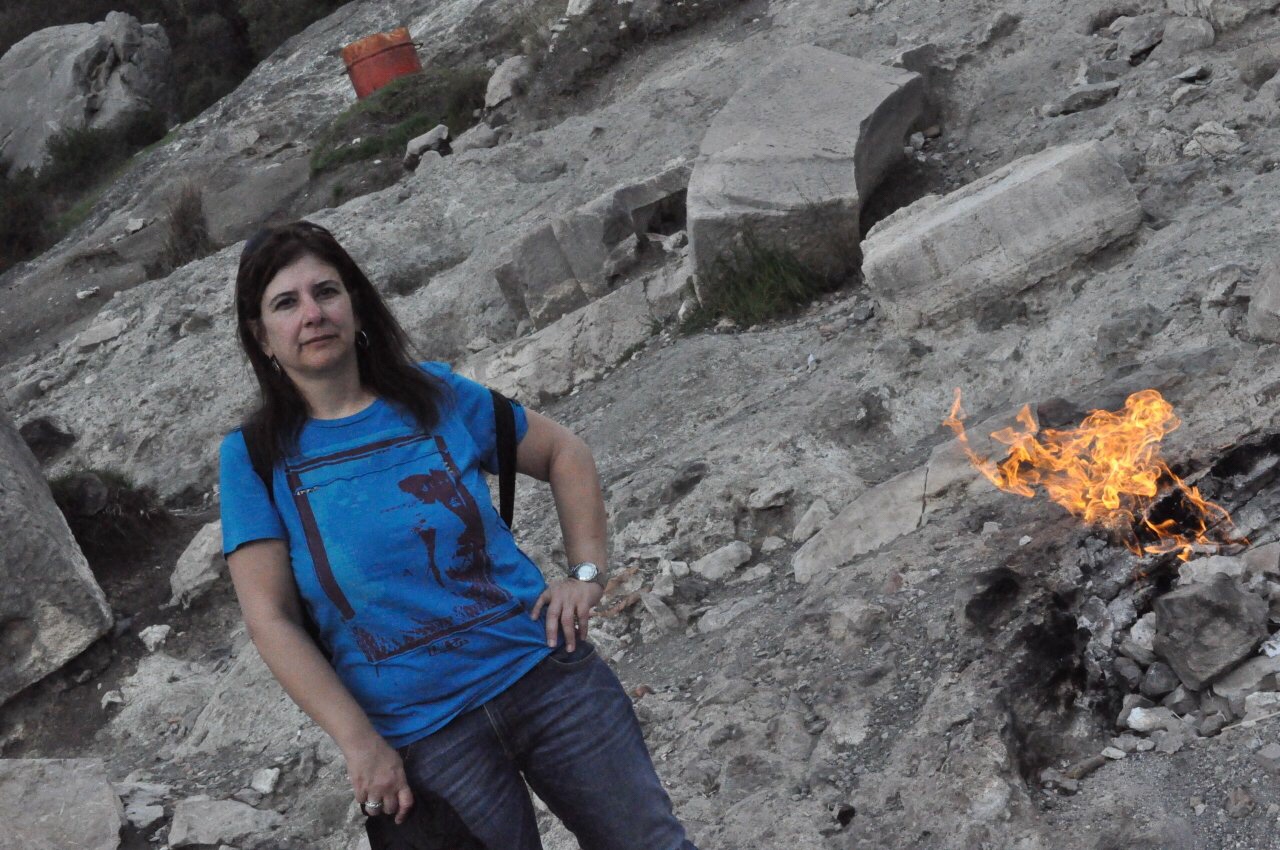 That morning, the cloudy skies made me rethink how much I was missing the sun in winter. The light was pale; the cold wind made all of nature huddle away in a silent embrace, as if to allow the different embers of life to warm and comfort each other, while, all around, the fine drops of winter rain wetted the land. It was still raining lightly when I went to the window and looked out at the port. In Finike, the boats were waiting for summer, patiently anchored. Finding a hotel had been hard, we had driven many kilometers and tried several different towns until we found this place to rest.

“It’s 7:30, what time will we be leaving?” I was moody, and suddenly I understood why…I was missing my son. Putting the feeling behind me, I did my morning exercises and took a shower. Firat was ready by the time I was finishing putting the last objects in my luggage.

“Let’s have breakfast, food always make you feel better.” Someone said once “There is no love more sincere than the love of food.” Bernard Shaw might have written this using Firat as an inspiration. I am a foodie, but that morning, when my back was in pain and my head full of stories to tell, food was the last thing on my mind. However, when we got seated to eat, the smell of eggs, fresh bread, and çay opened a door from my madness. My stomach roared, hungry to be fed. I smiled. “I think you’re right, Firat. I’m already feeling better.”

“ We going to see Olympus.” Firat said.   My eyes widened in surprise.

“The Mount Olympus? But isn’t it now in Greece?”

“This is the other Mount Olympus. You’ll see…” Sure I will.

While Firat had his çay and cigarettes, I consulted Google. Olympus wasn’t only the name of a mountain, but also of an ancient city in Lycia. Furthermore, there are over twenty mountains with the name Olympus in the classical world. Turkey has two of them: Tahtali Dağ (near the city de Antalya) and Uludağ (Bursa). “Firat, I was wondering, which Mount Olympus did the Greek gods actually live on?” He laughed, I laughed too.

The ancient Lycian city of Olympus was situated in a river valley near the coast. The ruins are now part of a national park, the Olympus Beyda’ları National Park. Parking the car, we paid the entrance fee, and soon, were walking along a gravel path. On one side a rocky wall—the mountain—on the other a river.

The history of Olympus comprises, as in most ancient cities, pieces of pottery, images, and texts rom other cultures referring to it. The exact date of its foundation is unknown, but, by studying the features of a sarcophagus and a wall, it has been possible to conclude that the city had been founded at least by the Hellenistic period. Another piece of information about the city: its name was taken from the nearby mountain.

Around 100 BC, the city was ruled by Cilician pirates with the support of its inhabitants. This support caused Olympus to be expelled from the Lycian League. For around 24 years, the pirate chief, Zeniceste, held control over the region, including Corycus and Phasellis. In 78 BC, pirate rule ended when the Roman commander Publius Servillus Isauricus, accompanied by the young Julius Cesar, captured Olympus, and hit other territories.

When the Romans conquered the city, Cicero—a Roman politician and lawyer—described Olympus as a rich and highly decorated city. Olympus then became part of the Roman Republic. Emperor Hadrian visited the city in 131 AD, and, for a period, Olympus was renamed San Hadrianopolis.

In the Middle Ages, Venetian, Genoese and Rhodians built fortresses along the coast. In the fifteenth century the city was abandoned.

“Have you seen the sarcophagus?”

“Sure, “Who was he?”, I asked, trying to read the inscription on it.

“It was Captain Eudemos. That’s all I know.”

“Here: Captain Eudemos was someone who achieved important status in the region. Little is known about him, but his sarcophagus is decorated with a ship symbol on the front, representing the goddess Aphrodite. We know the main purpose of this symbol was to protect sailors. An inscription can be read above it:

‘The ship sailed into harbour, and anchored to leave no more,

As there was no longer any hope from the wind or daylight,

After the light carried by the dawn had left Captain Eudemos,

There buried the ship with a life as short as a day, like a broken wave.’”

“Wow. Interesting! I’ll add this to my tours in the future.”

Following the river, we ended up at a beach. The sun was now showing its face, finally allowing me to enjoy the encounter between the river and the sea. While I was mentally putting images to the poetry, Firat was having fun throwing a wooden stick, and trying to balance it on one finger like a juggler.

“Do you know anything about the city or who discovered it?”

“The city was mapped by Professor Ebru Parman and presents a fortification to the north; to the east are the Necropolis, the port and the tombs. There are ruins of baths, a chapel, a water channel, Lycian tombs, temples, churches, a theatre, and there are other Necropolis to the west and north. It’s a big city!”

But Olympus is not only about ruins and ancient history. The place is a very attractive summer destination for both locals and tourist from all around the world. They come here to enjoy the crystal clear water on the beach and hiking along the surrounding trails. But not only in summer; in the winter some visitors come to enjoy the ski slopes. It’s also possible to visit the top of Mount Olympus by cable car.

I left Olympus slightly annoyed. I wanted to stay longer, of course, but, as always, Fırat was arguing over shortage of time. I felt like a bureaucrat hurrying to fill out papers—better just to think, “Well the memory is in my digital camera…”—and to jump, without really savouring the beauty and mystery of each hidden place.

“Don’t be too annoyed. You’re going to see something special. Ready to go hiking?

We drove to another point in the park.

First I need explain what or who the Chimera is. According to Greek mythology the Chimera or Chimaera was a monstrous fire-breathing hybrid creature from Lycia. A hybrid? Yes, the Chimera was composed of parts of others animals. The monster is depicted as a lion, with the head of a goat arising from its back, and a tail that might end in a snake’s head. The Chimera was one of the offspring of Typhon and Echdina and, therefore, a sibling of Cerberus and Hydra. As you can see, a very frightening and curious monster.

I guess, now, you have remembered (even if you are not a mythology geek) where you have heard the word Chimera before. We use it today with a more generic meaning, referring to something impossible, or foolish to dream of. However, this little preamble about the Chimera has simply been to allow me to explain why this location is associated with the myth.

“Do you want to know the Turkish name to this place?—Yanartas.” Then, Firat explained that the name meant “flaming stone”. “You’ll soon see…” The route to the Chimera fire was easy, most parts consisted of stairs, but it was a kilometre from where we were, up on the mountain. 45 minutes or so later, there we were, seated near a dozen small fires issuing continuously from vents in the rocks on the side of the mountain, Below the fires we could see the temple of Hephaistos, the Greek god associated with fire. Hephaestus’ role in the Olympian cast of gods was to make weapons for them, he was their blacksmith.

•  An organic thermogenic gas (related to those II kerogen—a mixture of organic chemical compounds—occurring in Palaeozoic and Mesozoic rocks.

• An abiogenic gas produced by the low-temperature serpentinisation (hydration and metamorphic transformation) of ultramafic (ultrabasaltic) rock from the Earth’s mantle.

I gave the scientific explanation to Firat, who just shrugged and began to walk back to the car.

However, I actually was very impressed—the time we spent on the mountain was magical. Even knowing the real reason for the gas being there, I let imagination take control and visualise the Chimera’s breath issuing from its prison, beneath the rocks of the mountain…

“What about an orange juice before we continue.”

Lying between the Bey Mountains and the forests of the Olympus National Park, are the ruins of Phasellis. The town was set up by the Rhodians in 700 BC, and its privileged location—on an isthmus separating two harbours—made Phasellips the most important harbour city of eastern Lycia, an important centre of commerce between Greece, Asia, Egypt, and Phoenicia.

If it were possible to look down on the city from above, we would barely see the ruins, as they are hidden amongst trees. However, we would certainly notice the bay with its rich and almost indescribable blue. Crossing the Agora in the acropolis, we found the sea shores, and a path made from rocks that allowed me to walk across the salty water, my eyes fixed on the other side, seeking the ghosts of the ancient boats that once had been anchored there. My attention was captured by a group of men running along the line where the sea met the sand. They were wearing red shirts and shorts, Firat pointed at them. “Look, it’s a football team.”

From the sea shore, we went to the theatre—some people were taking photos, others just seated and admiring the place. I made friends with a ginger cat while Firat—who doesn’t like cats, dogs, or any other animal near him—was taking photos nearby.

Our hotel for those two days was in Antalya, a huge resort with all the niceties of accommodation a traveller could expect—pools, hairdressers, shops, a fitness centre etc. Firat was happy to be there in winter, allowing him to enjoy the place without having to work.

We visited Antalya. It’s a lively city, modern, responsive, with mosques from where the imams were calling the faithful to prayer, while other people walked from one side to the other shopping, working, enjoying the day, eating. Our first visit was to a mosque. I decided not to enter. “Why?” Firat asked. I didn’t want to answer; the truth was not something he wanted to hear. The truth was, I was tired of mosques.

From there, we went to photograph the Ataturk statue, an ottoman tomb, and the gardens around the restaurants and cafes. It was a welcome break from our visits to ruins.