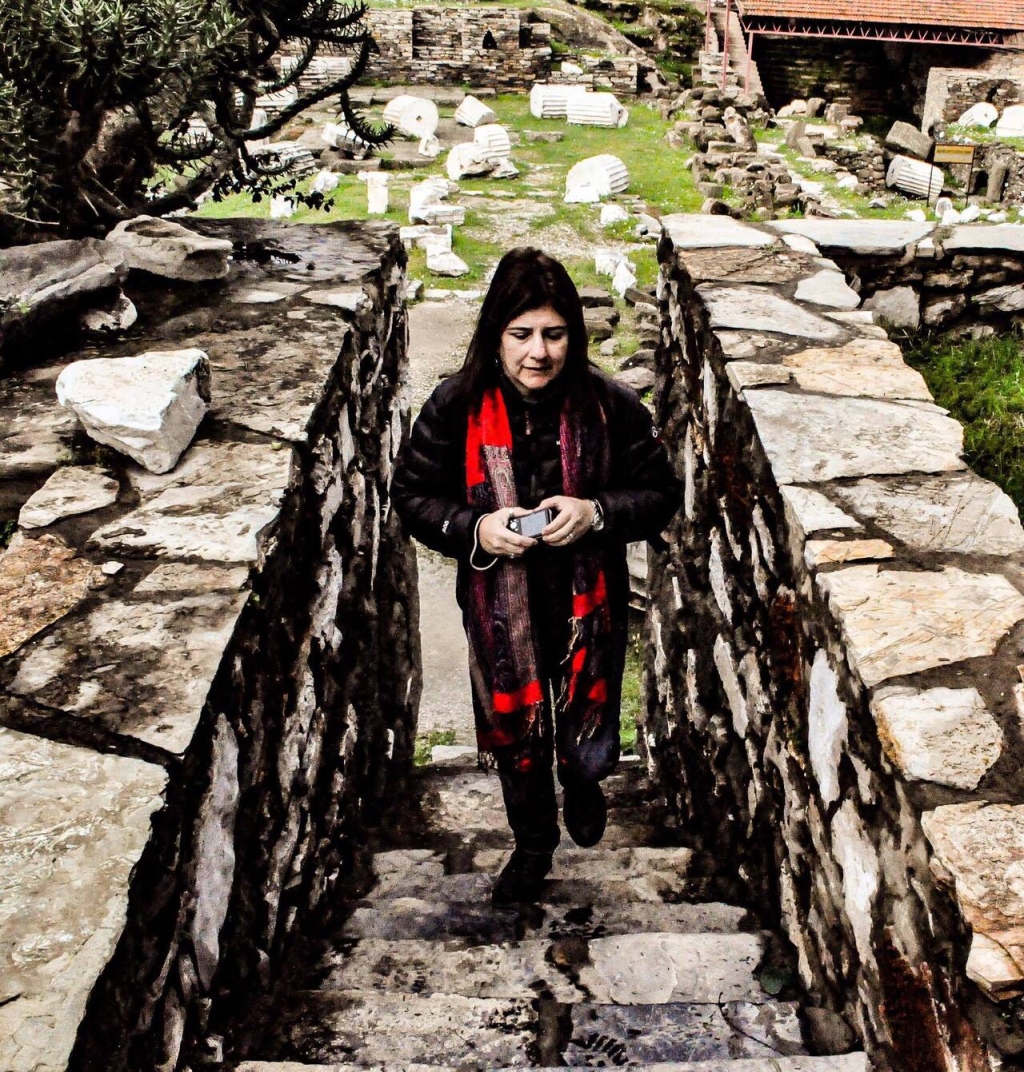 8 am, why do I always have that sensation that it is later than it is? My first step was a shower, then a big breakfast full of fruits, bread, eggs, and cereal. Firat, again, criticised my preference for cereal, but I explained to him that I just liked it. Simple!

I was a bit moody, the rain outside was dampening the pleasure of travel, transforming the roads, always under repair, into a muddy, dangerous path for us. I got into the car and turned on the music. From the window, I could see the same lake we had visited the day before. It was still grey, but with choppy waves caused by the strong wind. Our next stop was to be the ‘posh’ resort city of Bodrum. Fırat explained that the city was the preferred destination of Istanbul’s richest, and in the summer, it was a very crowdedplace.

While filling up with petrol, I observed the people around. There were always some sideways glances, and comments whispered about us. I had figured out now, that two individuals of different sexes and ages travelling together was a magnet for local residents. I didn’t give it much importance, but Firat was sometimes uncomfortable. Totally understandable, as he had to carry on living and working here, I was only a passenger, and when the journey ended I would return to my home (wherever home might then be).

Then çay, and a conversation about our lives, and back on the road again. After a few kilometres, Fırat asked me: “Want to know about a different place? One that isn’t on our roadmap. There are some ruins here. I’d really like to take a look.” The sky had opened up, as if someone was really sad and their tears were overflowing from heaven to Earth. I glanced around, and didn’t see any ruins, nor a city or even any kind of civilisation; only cows, vegetation, and rain. “Okay.” I answered. I had come to this trip with an open mind, and the unpredictable was something I was keen to accept with open arms.

Leaving the main road, the car followed a narrow, muddy road, where on one side we had cows and bee farms, and on the other, olives, mountains and native vegetation. We passed a couple, hoping we could give them a lift to Bodrum, but we were going in the opposite direction at the moment. Fırat promised that if we passed them again on the way back, we would give them a lift.

After fifteen minutes going in what was increasingly obviously the wrong direction we stopped the car near a lake where three fishermen were smoking cigarettes, and unloading fish from their boat. I stayed in the car, while Fırat talked to them. When he returned, we turned the car 180 degrees, and proceeded in the opposite direction to that we had been driving in until now. “I passed the road to the village.” Well, that was news! He had a habit of not looking at road signs and rarely respected my opinion in that field. I simply smiled…and just continued to look around; missing turnings was getting to be routine!

Finally, we parked the car and continued on foot in our search for the Temple of Athena. Along the way, we passed two elderly ladies who lived in this village that nested on the slopes of the ancient Anatolian mountains. Fırat asked directions from them, and, in return, I bought some of their craftwork. Firat had explained that, during the winter, there weren’t many tourists here, so money became short, and life harder, so my small contribution meant a lot to them.

The rain was still drenching both land and people as we walked along a muddy path and then passed though a gate. As we went though and held the gate open a cow on the other side bolted through it. From the top of the hill, the two ladies we had talked to shouted angrily at us. With a few manoeuvres, Fırat managed to send the cow back to the correct side.

The next part was climbing, not just the slope of a mountain, but over rocks. Immense, slippery rocks covered with slime and water. It was as if Fırat was a goat, he was jumping from rock to rock, always going up. I needed all my courage and sense of balance to follow him. I slipped more than once; my coat (that I loved so much) suffered an attack from a branch, and lost the fight. The umbrella Fırat had insisted I brought with us, was one more problem, as was the camera I had around my neck. Fırat encouraged me, believing I could do whatever I wanted, or, perhaps, whatever he could.

When finally, we reached the top, the view was breathtaking, and my camera did not stop clicking. While I got some good shots, Fırat called his brother to tell him where he was. As he smoked a cigarette, I was now wondering how on Earth we would get back down to the road, to safe ground. “Jump! We just have to jump.” He said that to me, and then jumped about 4 or 5 metres to the ground. I stayed, affixed to the top of the rock, stuck like a feather in a branch, terrified! I refused to jump; he insisted I could do it easily. Our argument lasted 10 to 15 minutes. When I finally figured out there wasn’t any other way to get back to the ground, I jumped. Unfortunately, the result was an injury to my right knee, something I will carry with me forever (I still have problems with that knee today).

We walked (I stumbled) back to the village, the path was similar to the one we had followed before, and, again I felt like was having to be a mountain goat, leaping from rock to rock, climbing natural stairs or others improvised by man. In the end, the pain in my knee, and the fear I had felt, was partly compensated a simple, rustic lunch in a small restaurant. We were the only two people there; the fire was roaring; the view of the lake was like a painting, and the fish with onions, tomatoes and bread, accompanied by ayran was delicious. We enjoyed the home-grown olives and some welcome moments of peace.

After lunch, we headed to Bodrum. The view from the road was just marvellous. Yes, the Brazilian coast has fantastic views, but to look to the right and see the Aegean Sea, a passage to so many civilisations, is something unforgettable. Anyone who loves history and has the slightest notion of the importance of this land and this sea can understand… It is, indeed, touching.

Bodrum was different from the other cities we had visited, more international – although less-so than Istanbul. Leaving the car safely parked, we headed to the Underwater Archeological Museum. The museum is housed in the Bodrum Castle and important site in Anatolian history. . In it, there is a collection of the artefacts recovered from within the region by archaeologists. There were complete boats from 1300 BC and various parts of others.

Leaving Bodrum Castle, we had to sort out a hotel. Finally, after some frustrated attempts, we found one. Our hotel in Bodrum was somewhat exotic. It stood on a hill, and the suite where we stayed was downstairs and opened onto the garden. It had a huge living room, a bathroom and the bedroom itself. It was a boutique hotel and very comfortable, despite being in the process of refitting for the summer.

Next day, we discovered more of Bodrum.

Bodrum or Halicarnassus founding is reason for debate among various scholars, but all them agreed the city was a Dorian colony, information supported by the figures on its coin, such as the head of Medusa, Athena or Poseidon. The city was expelled from the Doric League when one of its citizens offended the god Apollo. In the early fifth century Halicarnassus was under the sway of Artemisia I of Caria (a famous naval commander at the Battle of Salamis). It was her relative, Lygdamis who became notorious for having put to death the poet Panyasis, and causing Herodotus – the best known Halircanassian – to leave his native city (c 457 BC).

Caria was under Persian rule form 404 to 358 BC. The Carian king was Hecatomnus who left three sons: Mausolus, Idrieus, and Pixodarus – all of them, in their turn, succeed the king on the throne – and two daughters Artemisia and Ada . Artemisia married Mausolus, and Ada married Idrieus.

It was Mausolus who moved the capital from Mylasa to Halicarnassus. The make over of the city begun. Mausolus ordered the deepened the city’s harbour, using the dragged sand to make protecting breakwaters in front the channel. He also paved the streets and squares, built house for ordinary citizens, and a massive fortified palace to Mausolus.

They had spent huge amounts of tax money to embellish the city, commissioning statues, temples and building of marble. When Mausolus died in 353 BC, his wife, sister, and successor Artemisia II of Caria, began construction os a magnificent tomb for him and herself, overlooking the city. She died in 351 BC, and the tomb was finished in 350 BC.

This tomb was considered one of the seven wonders of the world, and was the source to the word mausoleum.

I visited the place where Mausolus and Artemisia tomb was built. The Mausoleum was approximately 45 m in heigh, and the four sides were adorned with sculptural reliefs, crafted by four famous Greek sculptures. The tomb was at the centre of a courtyard over a a stone platform. A stair, flanked by stone lions, let to the top of the platform. There, many statues of gods and goodness were company to stone warriors mounted on horse backs guarding the tombs.

The tombs itself, was at the centre of the platform, and was made of marble. This part was covered with bas-relifs showing action scenes, including th battle of the centaurs with the Lapiths and Greeks in combat with the Amazonz (a race of warrior women).

On the top of this section, thirty-six columns rise for another third os the Mauseleum height. Standing between the columns was a statue. The roof was pyramidal in form. Peache on the top was a quadriga: four massive horses pulling a chariot in which rodes images of Mausolus and Artemisia.

The tomb was destroyed by invaders, earthquakes and time. The place where so magnificent tomb was erected is in the middle of simple houses, in a narrow street in Bodrum.

Letting the place, we follow to the city ancient walls, and the theatre. The theatre still in use to summer concerts.ace

The next day we left for Gökova.