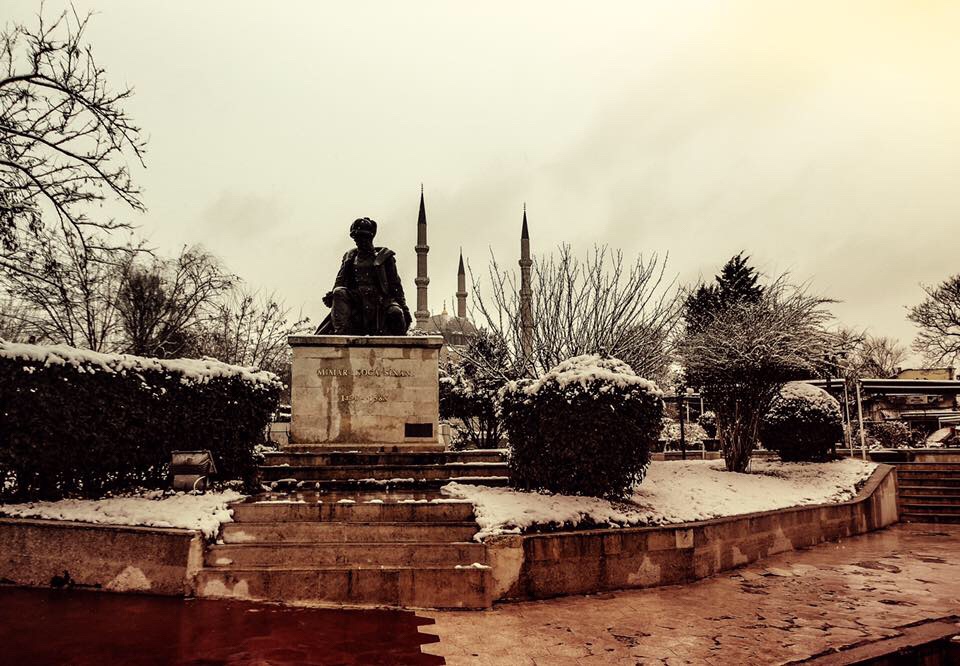 I wasn’t searching for myself. The Turkey Project that initially I called Lights of Turkey was a quest to find the real Turkey. Not the country embraced by so many stereotypes and fictional stories. What I wanted was to illustrate, from my perspective, the trivial country that both contrasts with and sets the archaeological and historical aspects in a modern context. Thus, although I had read many books about the country, and the ancient civilisations that had lived there, I preferred to let my own point of view guide me through the cities, people, art, history, culture, I found on my way. I understand that we all have some frames of reference into which we try to fit the world around us, but it was an important element of my path to avoid such stereotypes and prejudices. The most interesting was seeing, how the Turkish people, themselves, engaged with those same stereotypes I was trying to put aside, and sometimes it was impossible not to see Turkey by th eyes of their own people, and their stereotypes. And

The first aspect to impact on me was the attitude to the roads. Many travel guides told me, in their rhetorical language that the roads in Turkey were bad. What I actually saw was very different. Maybe, the reason was that my country of origin at that time was Brazil, or, who knows perhaps because I have visited so many developing countries, but the roads looked to me, not very different from those in Brazil.

Initially I had been driving, Firat a tour guide who was my companion on the trip, had his car licences only a week before I arrived. Istanbul is not an easy city to drive, but I learned to drive in big cities, Istanbul wasn’t a challenge. When we left the more intense traffic, Firat decided to take the wheel. It was 10:30 am when we hit the road, our detination: Edirne.

But first, we made a pit stop for Firat to say goodbye to his brother, Serhat who lived and worked in Istanbul as well. It’s important say the two bother were very closer, and Serhat was a bit concerned about Firat taking the road with a unknown woman.

When we finally begun the journey, I was surprised with the pavement and commented on it. Firat only made a comment: “It’s too early to make compliments.” I smiled.

After about 40 minutes of driving, suddenly, I saw some white spatters appear on the car. I couldn’t believe it…but it really was! “Snow!” confirmed Firat, “ It’s snowing!” The snow gave a European touch to a landscape dominated by farms, especially sunflower plantations that started to look so incongruous with their large yellow rays projecting from the white blanket. We were traveling in Thrace, the European part of Turkey, not a mountainous place, and it was winter. 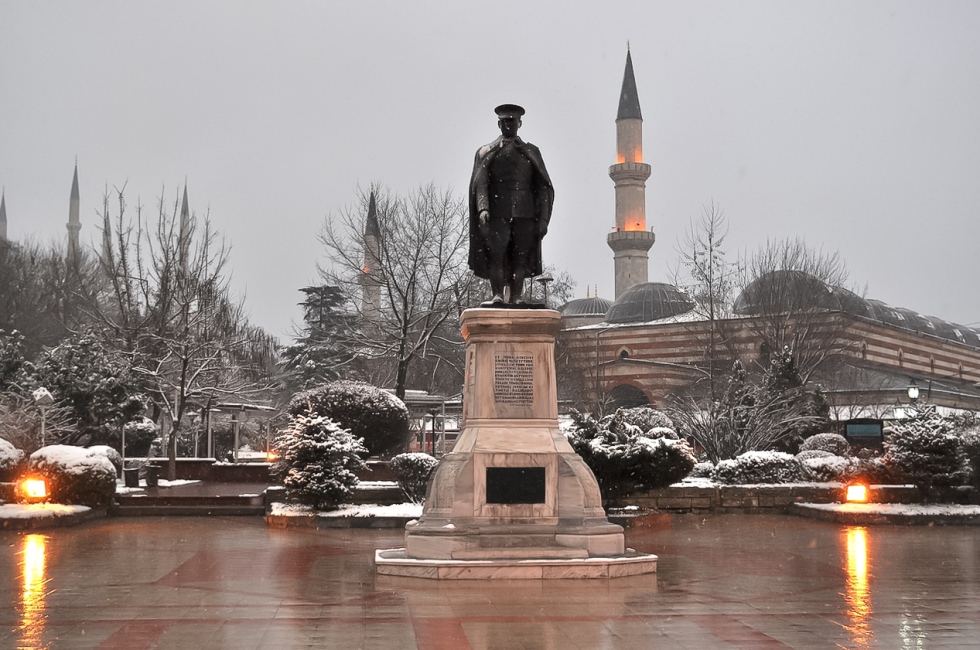 Edirne is a city of about 130,000 inhabitants and the countryside reminded me of Itatiba – a region of São Paulo State. It had snowed a lot but Fırat was adamant that we had to see the most famous of the three mosques in the cityThey were waiting especially for us.

Our first mosque was Selimiye Camisi.

The Selimiye Camisi mosque was built by the most respected and famous architect of the 16th century, Mimar Sinan, an Armenian convert to Islam. He considered Selimiye Camisi (built in the name of Selim II) to be his masterpiece. The mosque is big, but the greatness of a mosque is a little different from a church, if difficult to explain but churches are always full of images, benches, altar. A mosque is more open, no benches, no altar, no images. But soon as you get inside, you begin to understand that, and as with any temple it is a place full of symbolism, a place for prayer. I have no religious belif=s, neither god is part of my life, but it’s quite interesting observe other who profess some faith, as is to watch their rituals. 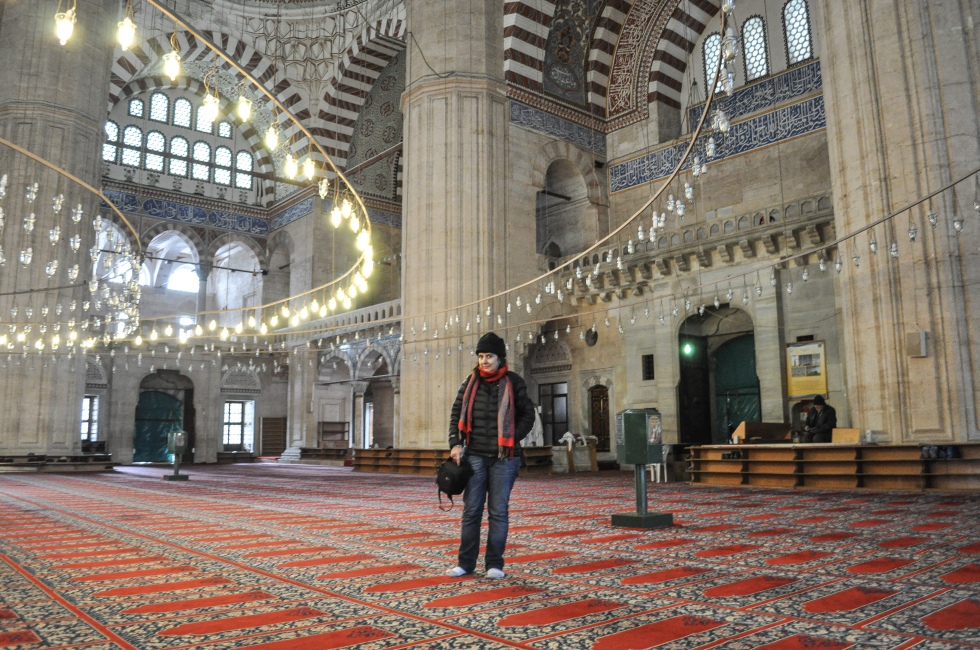 Fırat explained to me all he knew about mosques. “There are four things that every mosque has: a mihrab, which shows us the direction of Mecca and is from where the hoca (the mosque leader) reads the Koran and explains its meaning. The minbar, is used by the hoca for readings on Fridays and during the Muslim festivals: Ramadan and Sacrifice. Outside there is the sadirvan, a kind of fountain or wheel, where the cleansing is performed. Such purification before prayer is precise and detailed; the believer has to wash hands, forearms, mouth, nostrils, and face, in addition tocleaning with water ears, neck, hair, and feet.”

The fourth element is the Minar (minaret). This is not actually essential to a mosque, but has come to symbolise the unity of God.

It was surprisingly easy for me, as a non-muslim woman, to enter the mosque. There are many people who are worried about doing so, having heard so many biased stories about Islam and the ‘kind of person’ who practises the religion. I came with my head covered, and in silence. We were careful to make sure that it was not prayer time, and I simply observed discretion – little different from how you would enter a church or synagogue, really – the key is simple: respect.

Thirty minutes later, we finished our visit; it was time for lunch. We went to a simple restaurant near the mosque, and the question was: what to eat? When I started this journey I had decided I would refuse food that was not Turkish – even if it were fast food, it would have to be of Turkish fast food. In those days nothing in my palate was Western. I left the choice in the hands of Fırat, who came up with: “Liver, let’s eat liver, ayran and salad, okay? ” Liver! I don’t like liver! It doesn’t matter what animal it’s from, I hate the strong taste. However, I had promised that I would prove everything. 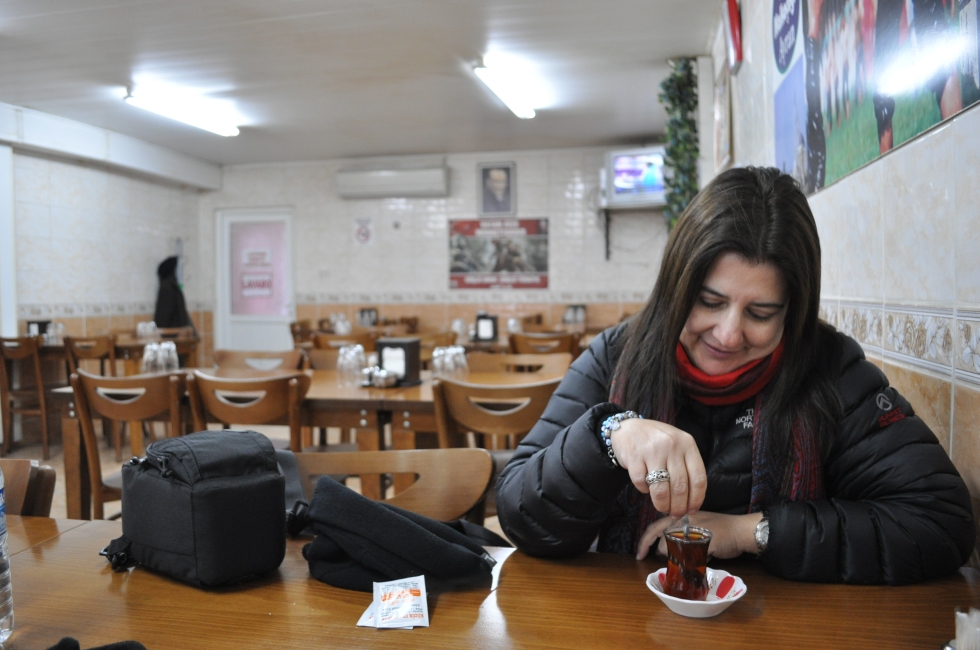 After lunch, we went to visit the ESKI CAMI or Old Mosque. A magnificent example of Ottoman architecture and art. Built in the name of Sultan Mehemet I, in the early 15th century, the mosque has a touching simplicity, charm and beauty. 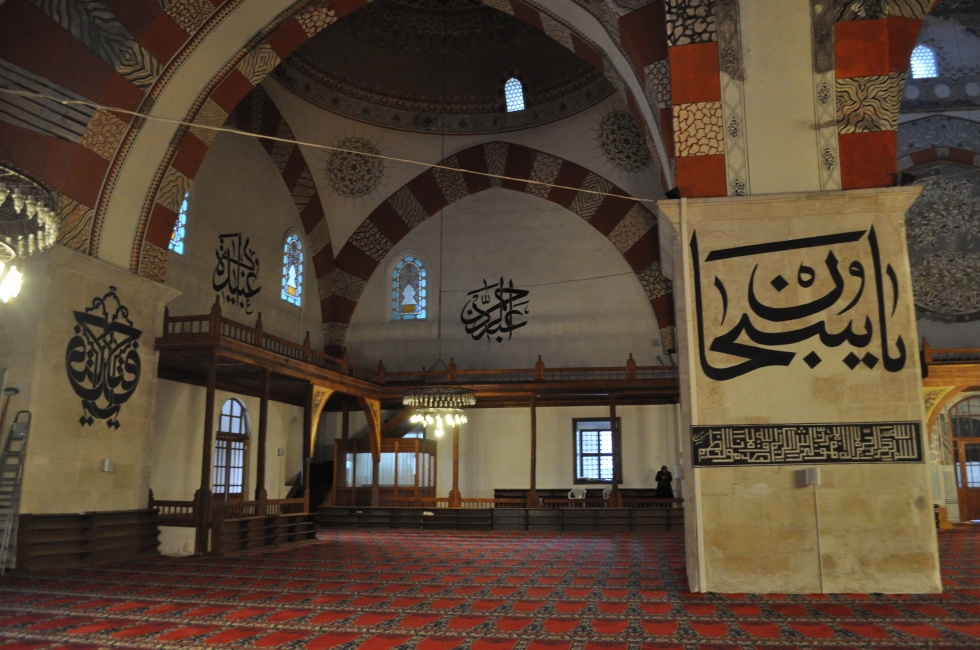 Finally, we visited UÇŞEREFELİ CAMI or the Three Balconies (Terraces) Mosque. Also, built in the 15th century and was ere

I wasn’t searching for myself but Turkey certainly helped me to find…..